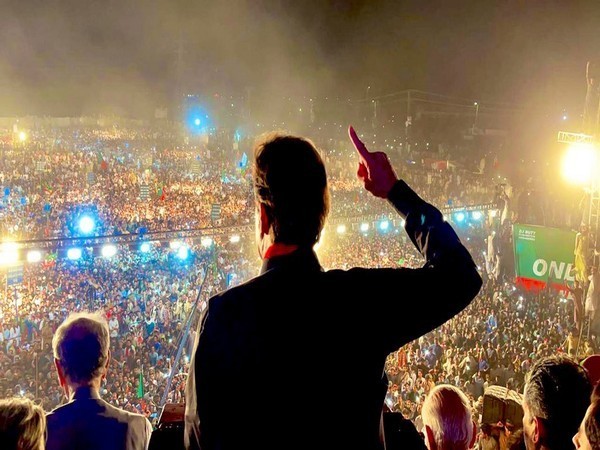 Peshawar [Pakistan], April 14 : Lashing out at the PM Shehbaz Sharif-led Pakistan government over the recent crackdown on social media in the country, former Prime Minister Imran Khan said that it is not the Pakistan of the 1970s era but a Naya Pakistan where people have the right to raise their voice through social media.

Speaking at a rally in Peshawar Imran Khan highlighted that the people of Pakistan will not accept Shehbaz Sharif as his Prime Minister as he has corruption cases worth Rs 40,000 crore.

There are 40,000 crore corruption cases against Shehbaz Sharif. Do you think we will accept him as our Prime Minister? and whoever thinks so... would like to tell that it is not that 1970's Pakistan when Zulfikar Ali Bhutto was removed with the help of foreign powers. It is a Naya Pakistan," he said while addressing a mammoth rally at Peshawar.

Imran Khan had mentioned the US of interfering in Pakistan's politics and plotting to oust his regime citing an alleged "threat letter" that was sent to Pakistan, carrying the exchanges between Pakistani diplomats and US officials.

"It is a social media's Pakistan. Today, the country has 6 crore mobile phones, through that the youth raise their voice. Now nobody can shut their mouth," he said addressing a massive crowd today.

Issuing a stern warning to newly elected Prime Minister Shehbaz Sharif over "the actions he is taking against the social media," Imran Khan said that "the day we raise our voices over it, you will find no place to escape".

Imran Khan's remarks come after Federal Investigation Agency (FIA) has arrested a "mastermind" and at least six other members of his network for launching a Twitter trend against the country's Army.

The mastermind was reportedly behind over 2,100 Twitter accounts involved in a social media propaganda campaign against the Army, The News International reported.

Shehbaz Sharif, President of Pakistan Muslim League-Nawaz (PML-N) and former leader of the Opposition, was elected the 23rd Prime Minister of Pakistan by the National Assembly of the country on Monday, a couple of days after former PM Imran Khan's government was voted out of power in a no-confidence motion following a series of dramatic political events.