Sharif was elected as the country's new prime minister following the weekend ouster of Imran Khan, who resigned his national assembly seat along with most of his party members ahead of the vote. 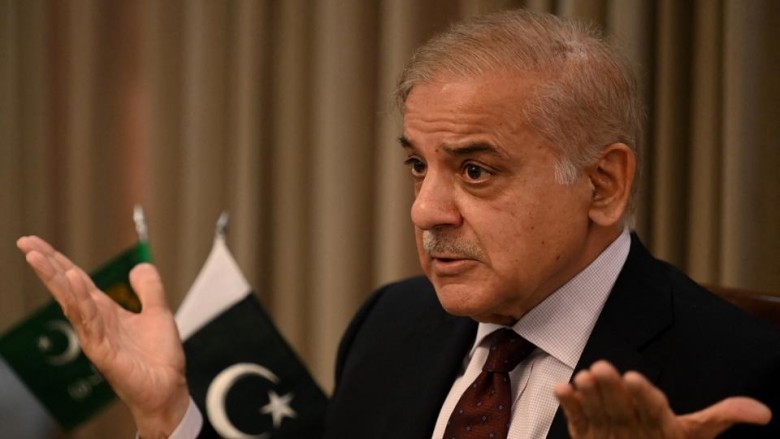 Sharif was elected with 174 votes in his favour on Monday after more than 100 lawmakers from Khan's Pakistan Tehreek-e-Insaf, or Pakistan Justice Party, staged a walkout of the National Assembly in protest.

“Mohammad Shehbaz Sharif is declared to be the prime minister of the Islamic Republic of Pakistan,” announced the acting speaker, Asad Sadiq.

Sharif was the only contender. He is the brother of disgraced former prime minister Nawaz Sharif but his election will not guarantee a peaceful path forward — or solve Pakistan’s many economic problems, including high inflation and a soaring energy crisis.

The former opposition will now run a truncated house with a small majority of 174 lawmakers, which is enough to pass laws in the 342-seat assembly. However, if Khan's followers take to the streets — as he has heralded — it would create additional pressure on Parliament and deepen the crisis.

Khan was ousted early Sunday through a no-confidence vote in Parliament after three years and eight months in office.

Deserted by his party allies and a key coalition partner, the opposition pushed Khan out with 174 votes – two more than the required simple majority.

In a show of strength and precursor to the political uncertainty ahead, Khan rallied hundreds of thousands of supporters late Sunday to protest his ouster, and describing the next government as an “imported government.” In cities across Pakistan, Khan's supporters marched, waving large party flags and vowing support.

The youth, who make up the backbone of Khan’s supporters, dominated the crowds.

Some were crying, others shouting slogans promising Khan's return.

Khan has also demanded early elections – the balloting is not due before August 2023. He has tapped into anti-American sentiment in Pakistan, accusing Washington of conspiring with his opponents to topple him.

His accusation resonates with his young support base, which often sees Washington's post 9/11 war on terror as unfairly targeting Pakistan.

The opposition, which accuses Khan of economic mismanagement, appealed to the Supreme Court. After four days of deliberations, the court ordered Parliament re-instated and the no-confidence vote went ahead. A marathon Parliament session started on Saturday and Khan was ousted early Sunday.

Khan claims the opposition colluded with Washington to topple him, allegedly because of his independent foreign policy favouring China and Russia.

He was also criticised for a visit he made on February 24 to Moscow, where he held talks with Russian President Vladimir Putin as Russian tanks rolled into Ukraine.

The US State Department has denied any involvement in Pakistan’s internal politics.

The opposition coalition consists of parties that cross the political divide, from the left to the radically religious. The two largest parties are the Pakistan Muslim League, headed by Shehbaz Sharif, and the Pakistan People's Party, co-chaired by the son and husband of slain ex-Prime Minister Benazir Bhutto.

In Pakistan, a few wealthy and powerful families have dominated politics for decades, with power most often alternating between the Sharif and the Bhutto camps.

Both political houses have been accused and at times convicted of widespread corruption — and both have denied the allegations.

Nawaz Sharif was unseated by the Supreme Court in 2015 after being convicted in connection with financial irregularities revealed in the so-called Panama Papers — a collection of leaked secret financial documents showing how some of the world’s richest hide their money and involving a global law firm based in Panama.

He was disqualified by Pakistan’s Supreme Court from holding office.

Asif Ali Zardari, Bhutto's husband who served as president of Pakistan after the 2008 elections, has spent more than seven years in prison, convicted on corruption charges.

Both families have dismissed corruption allegations against them as being politically motivated.