Pakistan has a 1-0 lead in the two-Test series against Bangladesh. 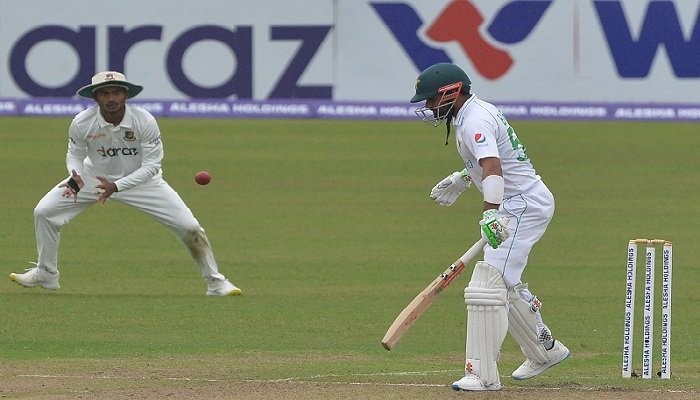 DHAKA: Spinner Sajid Khan has been instrumental in putting Bangladesh on the back foot in the second Test match in Dhaka Tuesday.

Bangladesh were put to bat on Day 4 after Pakistan earlier declared on 300/4. After losing two wickets of Azhar Ali and Babar Azam earlier on, Fawad Alam and Babar Azam stabilised the innings, scoring half-centuries.

However, when it came time for Bangladesh to bat, spinner Sajid Khan made quick work of Shadman Islam and Mahmudul Hasan Joy, with both departing for scores of 3 and 0 respectively.

A day earlier, Pakistan had reached 242-4 in their first innings at lunch on the fourth day with Rizwan -- who survived two reviews -- batting on 26 and Alam 19.

Only 63.2 overs of play were possible in the first two days because of rain and bad light, with Pakistan reaching 188-2 after electing to bat first.

Ebadot Hossain dismissed Azhar Ali for 56 runs in the second over of the day as wicketkeeper Liton Das took a simple catch after a top-edge.

Pace bowler Khaled Ahmed trapped Babar Azam leg-before for his maiden Test wicket three overs later as the Pakistan skipper was out for 76 runs, adding just five to his overnight 71.

Rizwan was given out twice, on 0 and 12, off the bowling of Ebadot and Taijul Islam respectively, but on both occasions he survived on review.

Taijul took the first two Pakistan wickets, on the opening day, before rain interrupted the game.

Pakistan lead the two-Test series 1-0 after an eight-wicket win in Chittagong.